A Course on Test and Item Analyses

If we can separate students’ responses to an item into more than two categories, we obtain more information about the students from this item. For example, instead of saying one group of students are likely of low abilities because they obtained the incorrect answer, and one group are likely of higher abilities because they obtained the correct answer, we can identify students who obtained partially correct answers and deem them likely to be of intermediate abilities. If many items can provide us with more categories than just two scores, the whole test will give us more power to separate students into ability groups reliably based on their test results. That is, the total number of score points of a test is directly related to the reliability of a test.

However, not every item can provide partial scoring. Sometimes an item lends itself only to correct or incorrect answers, such as a Yes/No response. Some items may have low ability students obtaining both incorrect and partially correct answers. In general, when we score items with partial credit scoring, we need to make sure that increasing scores reflect increasing student abilities. In the next chapter, some guidelines to scoring partial credit items are discussed.

where \(\theta\) is the ability parameter, and \(\delta_1\) and \(\delta_2\) are two item difficulty parameters for this item. Note that the denominator is just the sum of the numerators, so the probabilities add up to one. 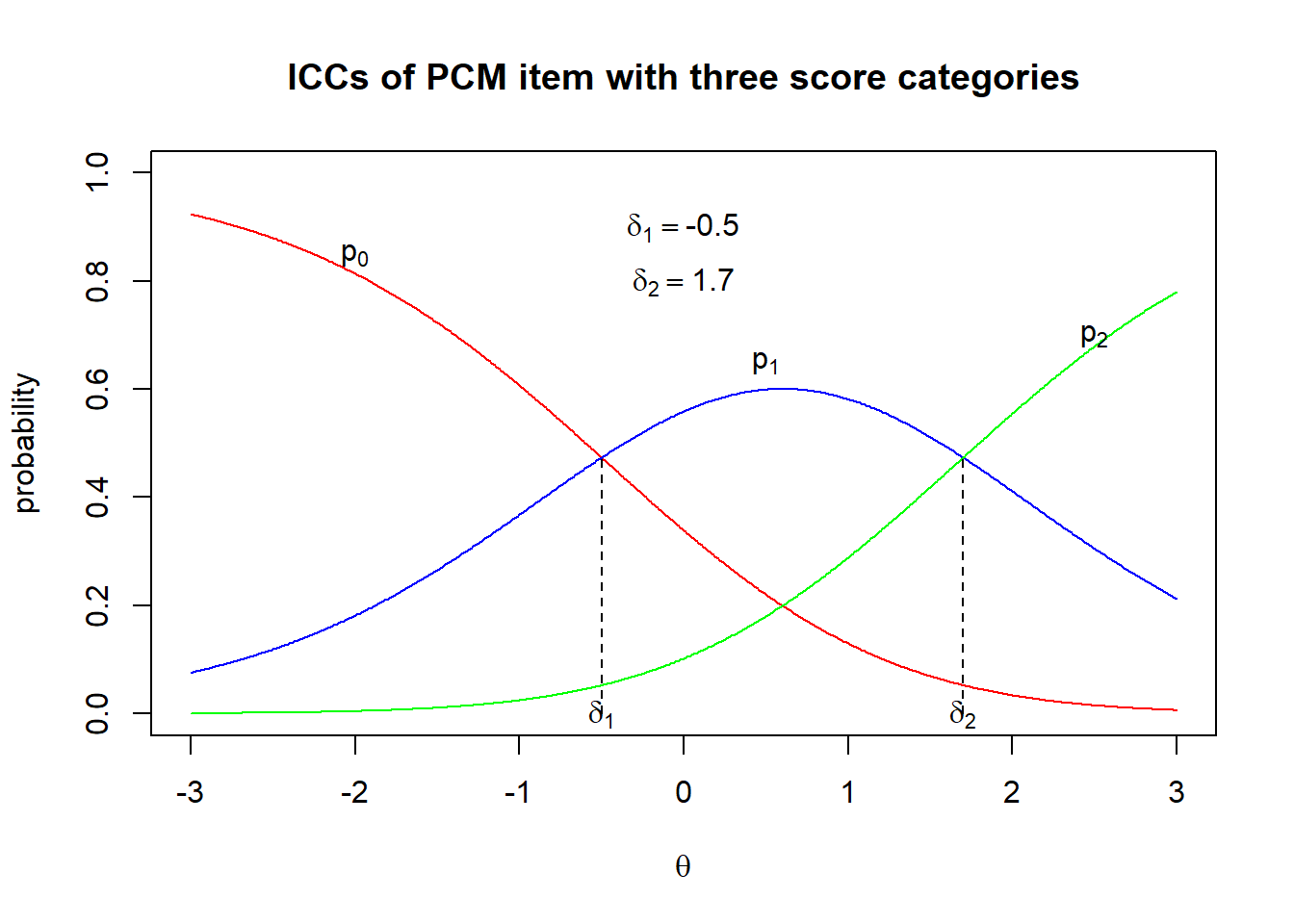 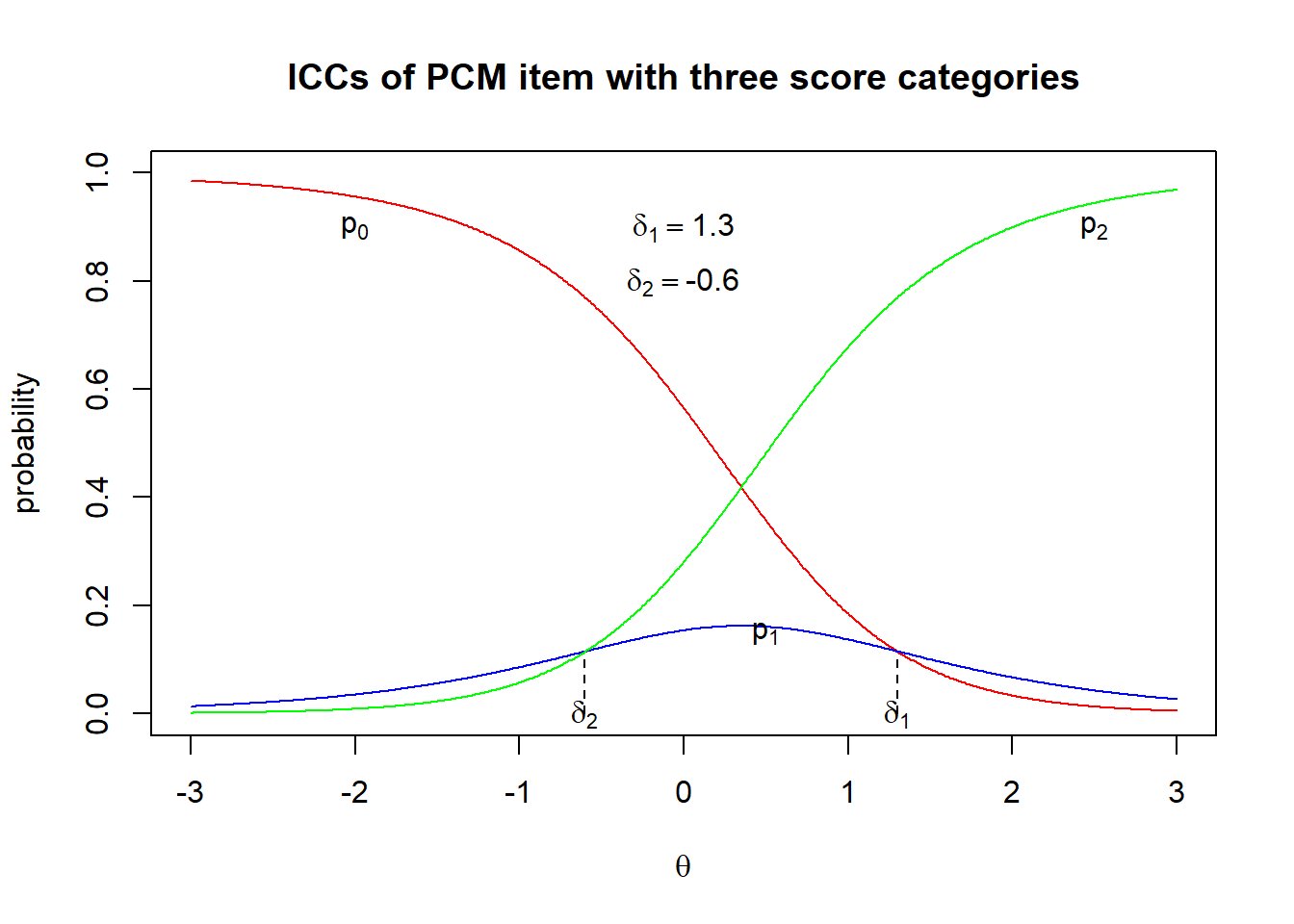 Figure 11.1 and Figure 11.2 show the item characteristic curves for two PCM items, plotted according to Eq.(11.1).

For the examples in Figure 11.1 and Figure 11.2 above, the Thurstonian thresholds are shown graphically in Figures 11.3 and 11.4. 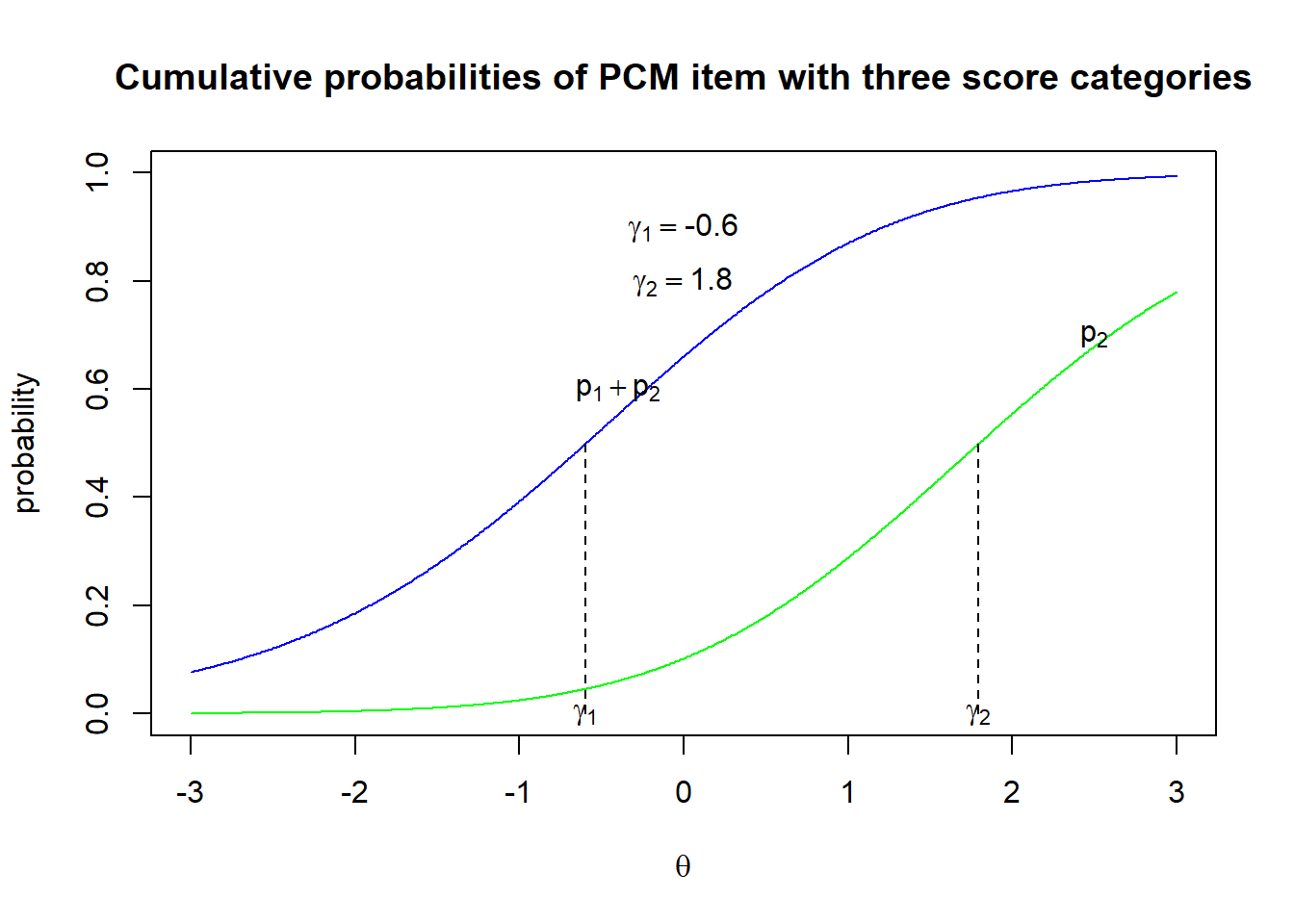 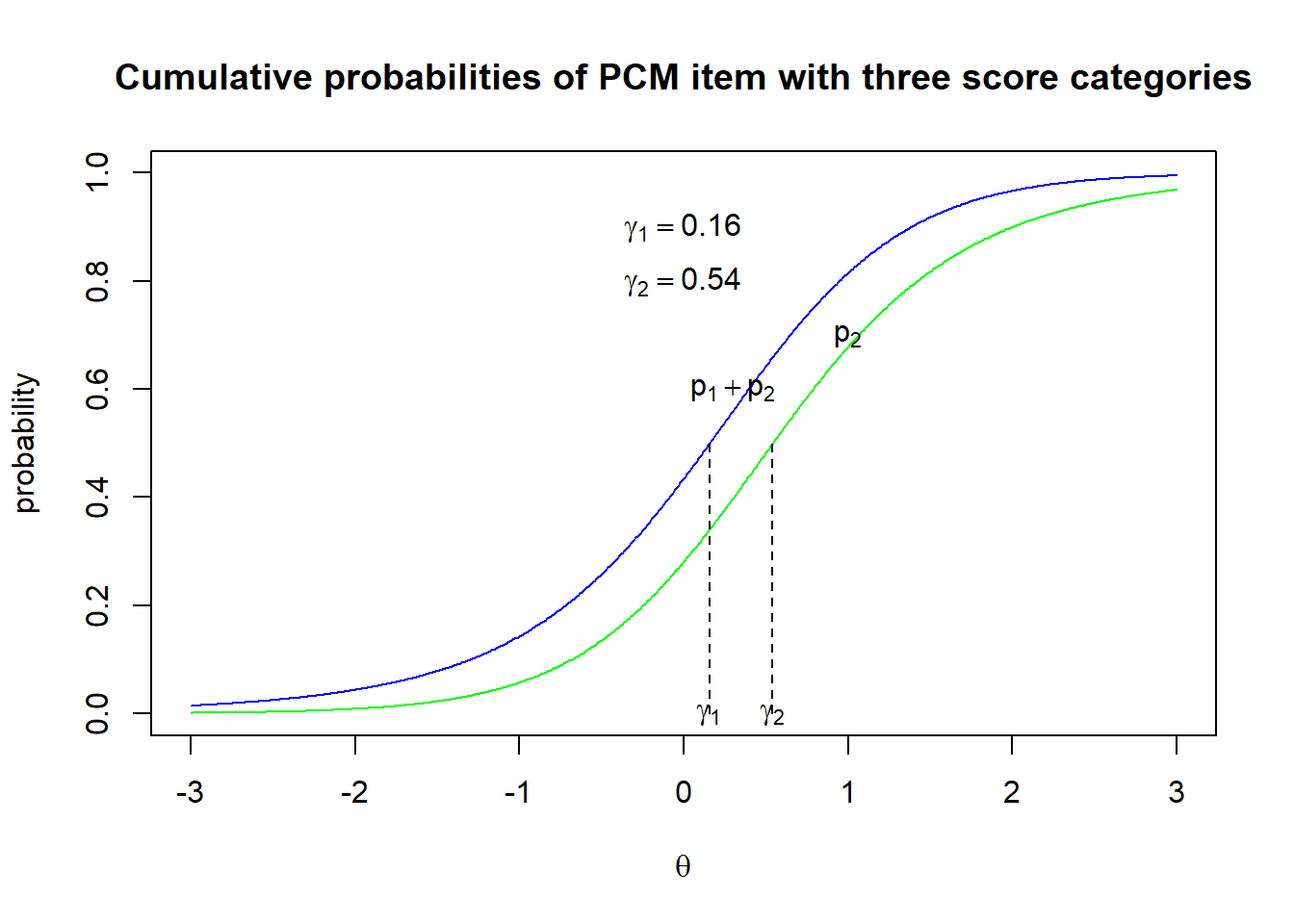 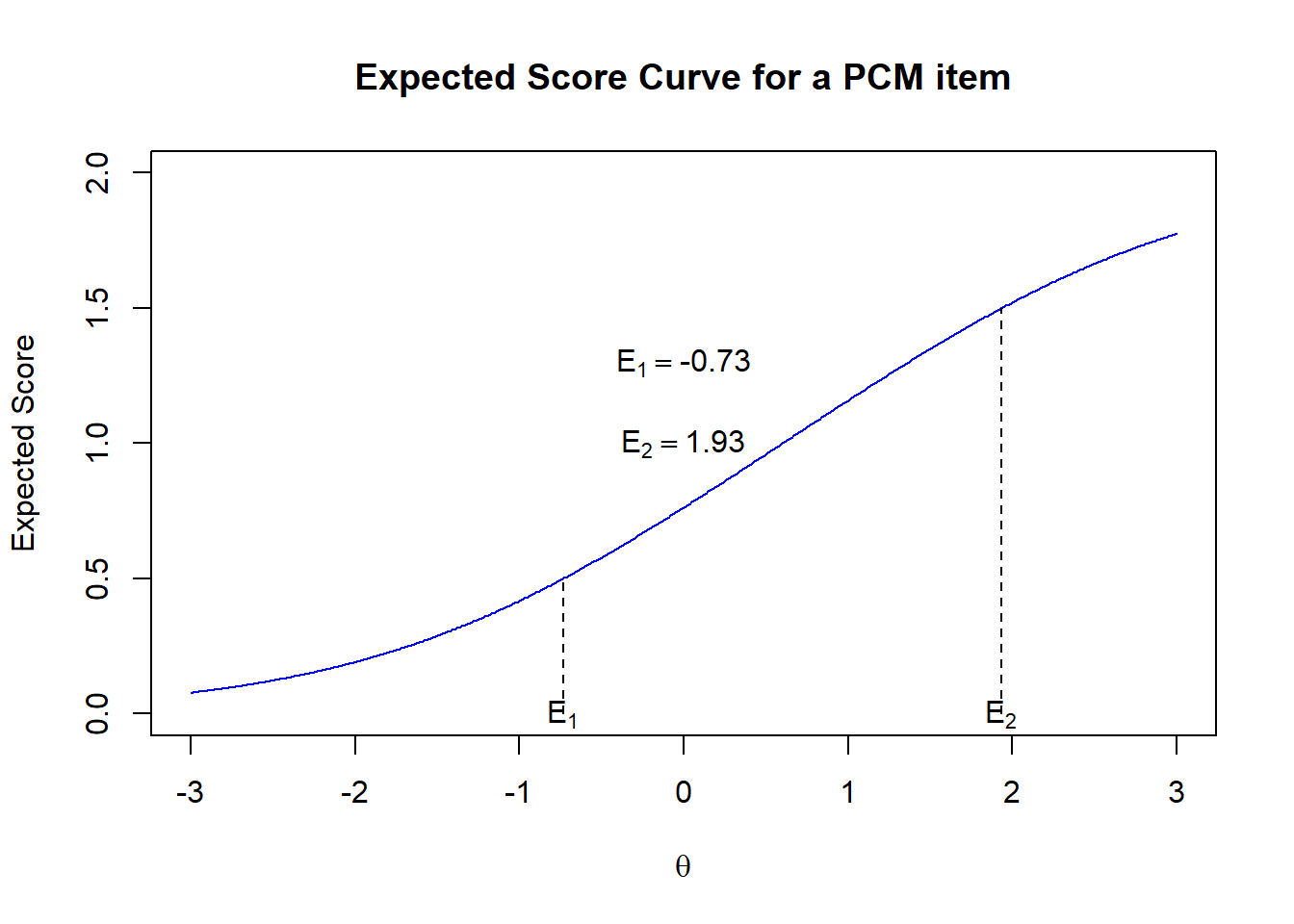 The data file is in text format, coded as A, B, C and D. In the following R code, we will learn about reading in text files and recoding data, as well as producing PCM ICC’s and the Wright Map.