A Course on Test and Item Analyses

14.2 What are plausible values? 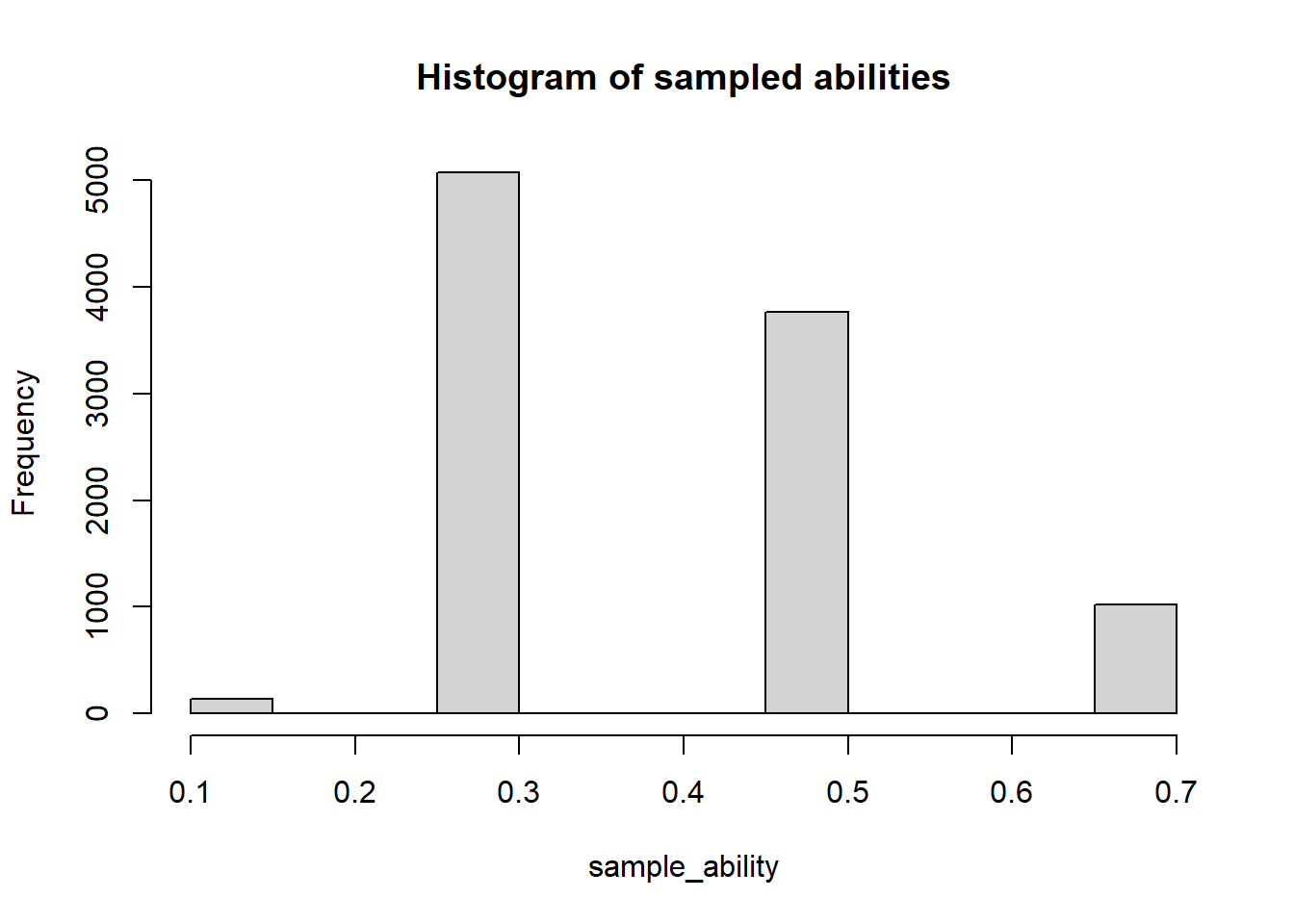 In summary, plausible values reflect a student’s likely ability measures, representing a probability distribution rather than a point estimate. In large-scale assessments, typically, 5 or 10 PVs are drawn for each student. With such small numbers of PVs, the PV’s will not represent the posterior distribution for each student very well. But when we aggregate the PV’s across students, we still get a good estimate for population statistics such as the mean and the variance.

14.3 Graphical Display of Prior, Posterior Distributions and Plausible Values 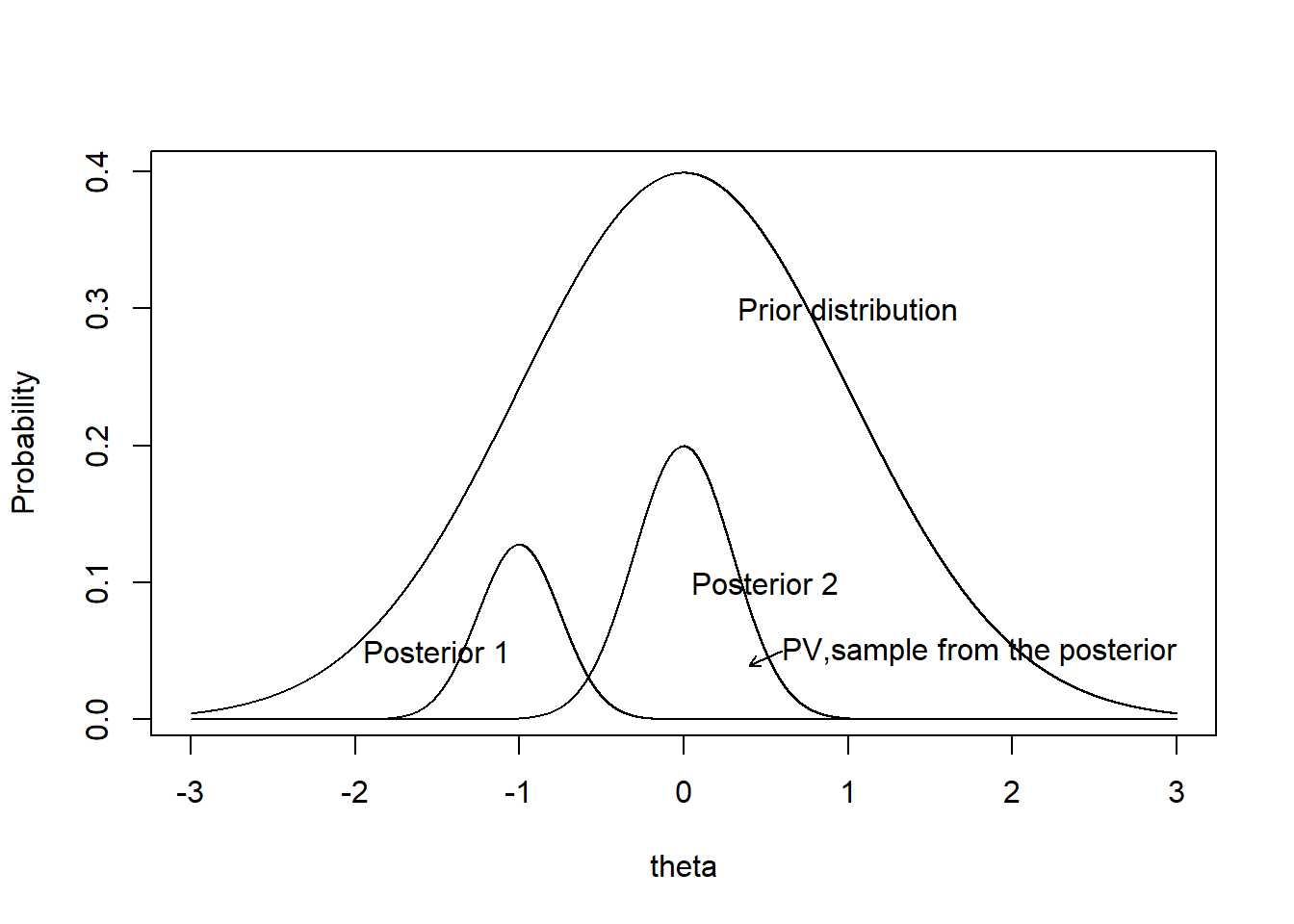 Figure 14.2: Prior and Posterior Distributions

Further, the sum of the posterior distributions for all the students will make up the prior.

14.4 Why do we need Plausible Values?

In the MML estimation process, the mean and the variance of the prior distribution, in addition to the item parameters, are estimated. That is, after MML estimation, we already have an estimate of the population distribution. This should be sufficient for us, without worrying about computing posterior distributions for each student or drawing plausible values.

But in international large-scale assessments, we are always provided with individual student’s plausible values. There are at least two reasons for this.

First, while international assessment organisations provide estimated country mean and variance scores and percentile points of the ability distribution for each participating country, the results may not be detailed enough for some policy makers in each country. Within each country, there are many subgroups of students such as rural versus urban, ethnic groups, and many other groups of interest to inform policy. In addition, there are also research questions specific to the country that require tailored data analysis. To carry out these analyses, the countries need to have expertise to carry out IRT scaling such as the MML estimation and other complex procedures. As some countries do not have expertise in psychometric analysis, the aim is to provide countries with data sets that can be analysed using familiar software programs such as SPSS or SAS, rather than specialised IRT software programs.

Second, for the computation of standard errors of estimates, the sampling design needs to be taken into account and a replication/bootstrap technique is used where population estimates are repeatedly computed with slightly difference sets of individual ability measures.

For both of these reasons, individual student ability measures are required. However, we showed in Section 13.6 that individual ability estimates such as the WLE produce biased results when aggregated. Plausible values can overcome these issues, as we shall see in the sections below.

In the above example, we assumed a discrete distribution for the prior where there are only five ability groups. This was for the purpose of illustration of the concept of MML estimation method. When we actually carry out an MML estimation, the prior is typically assumed to be normally distributed. The mean and the variance of the normal distribution are estimated from the item responses.

We will demonstrate how plausible values are produced using the TAM package. We will use simulation to generate the item response data. The following R code generates a data set, analyses it with the MML estimation method, and produces some basic results. In addition, plausible values are drawn. 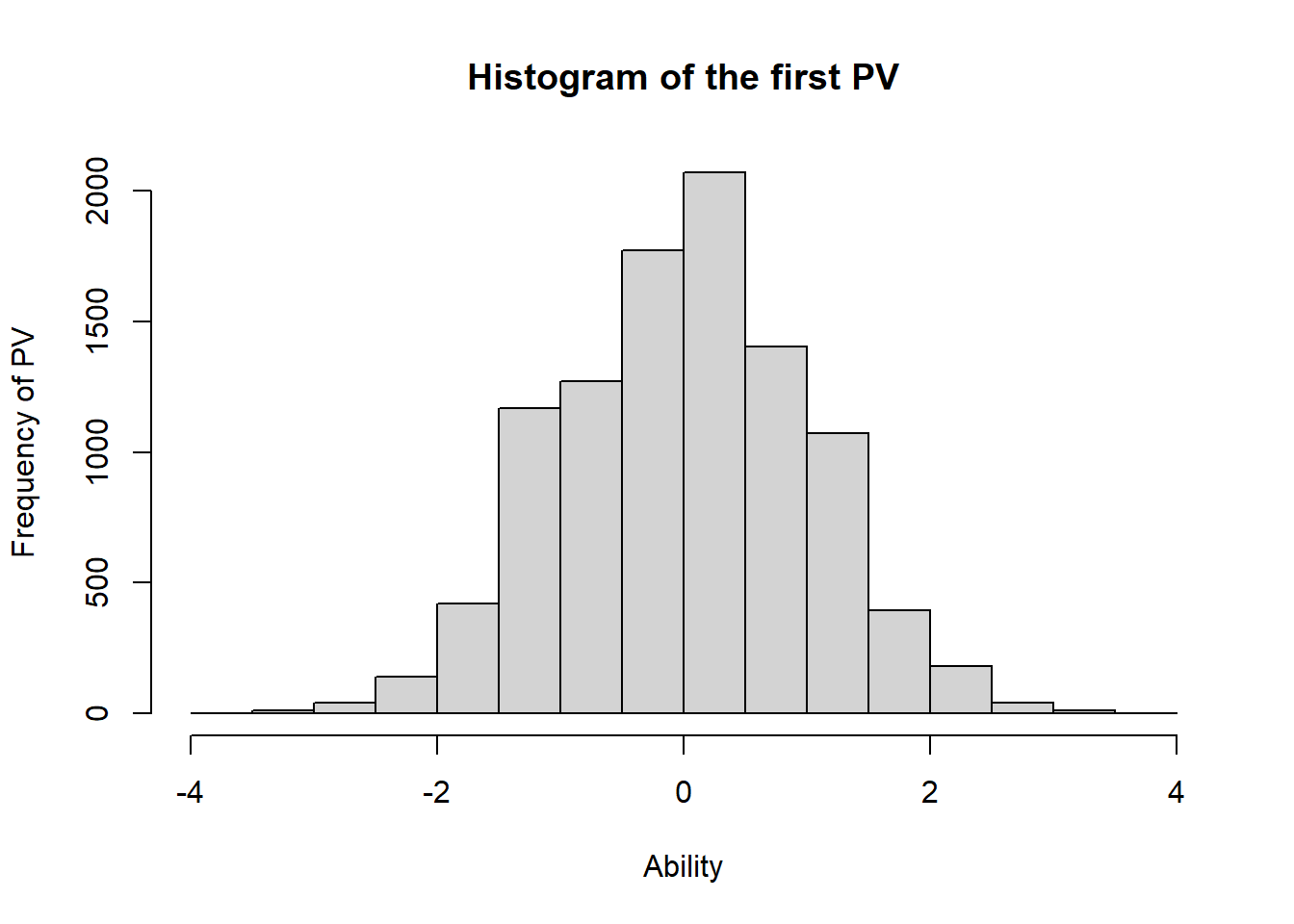 Figure 14.3: Histogram of the first PV

Both the directly estimated variance “mod1$variance” and the variance of the plausible values “var(pv$pv$PV1.Dim1)” are close to 1, the generating value.

Re-run the above R code using the second PV, third PV, etc. Do the results differ much?

Re-run the above R code with different numbers of items, in particular, for short tests like 10 items. When tests are short, the measurement error is large, and the bias in variance estimate using WLE is also large. How does the MML estimation perform regarding very short tests?

14.7 Do NOT average multiple PVs first for each student

One important note to make is that the 10 PVs must NOT be averaged first, before computing population mean and variance score. Below we will see the effect of averaging the PVs for each student.

Run the following R code, assuming that PVs have been drawn.

This time, the variance of averaged PVs is under 1. It is an under-estimate of the generating variance.

14.8 Expected a Posteriori (EAP) - The Average of PVs for Each Student

14.9 Why plausible values are better than WLE and EAP for population estimates

In addition to the unbiased estimation of group variance, plausible values also reconstruct a continuous ability distribution, while WLE and EAP have discrete distributions. The following shows the histograms of WLE, EAP and PV respectively for a 10-item test with 10000 students. 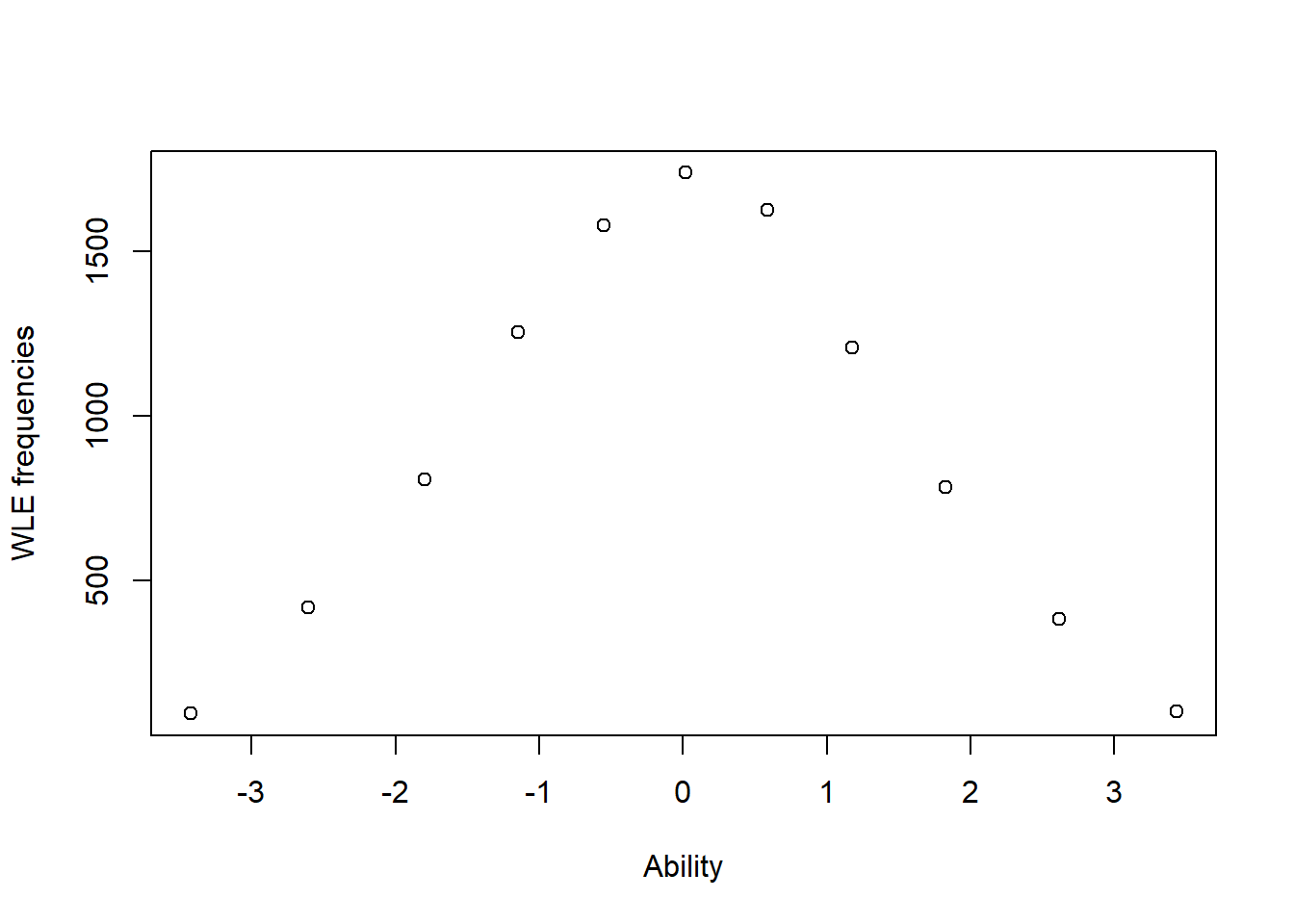 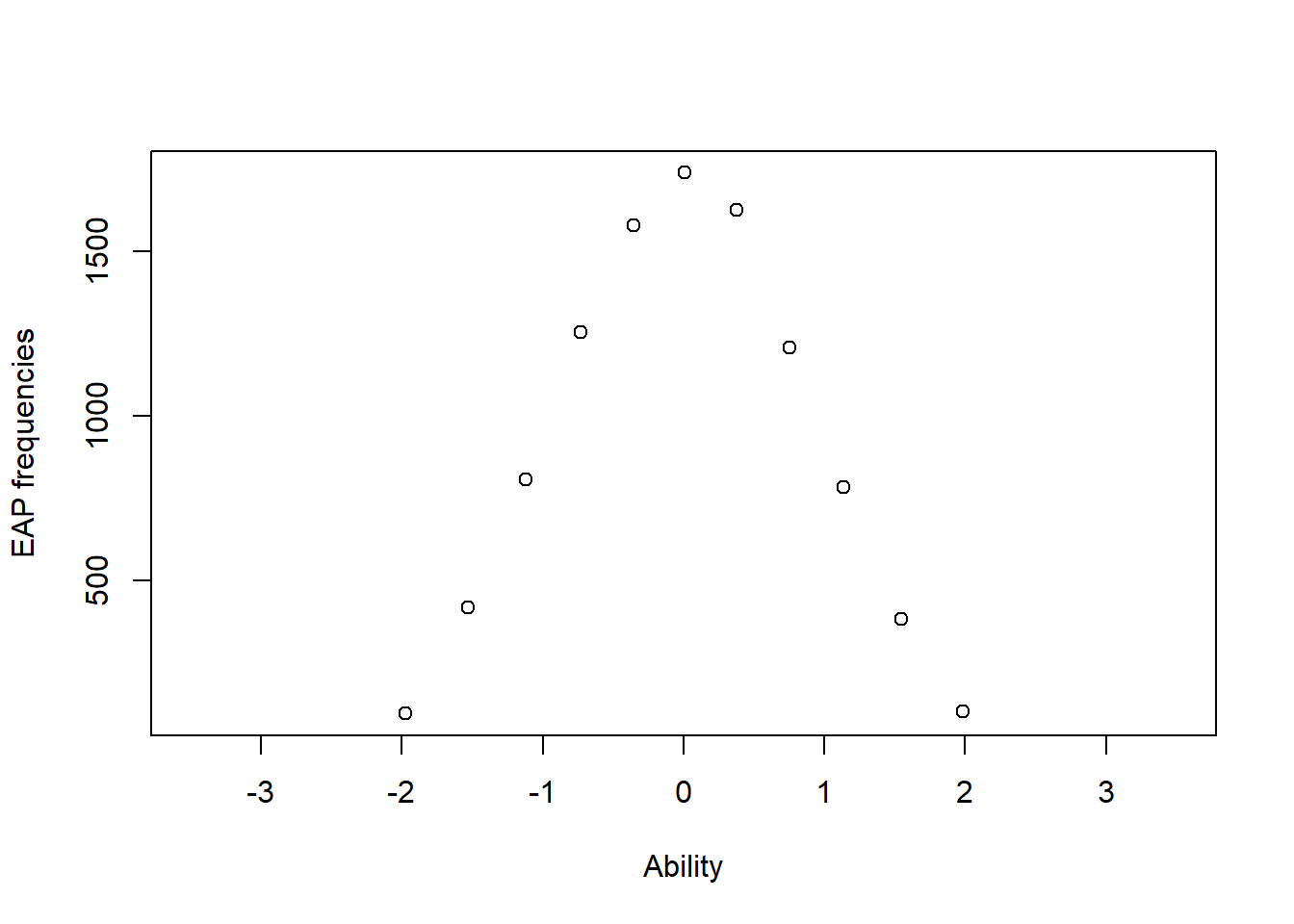 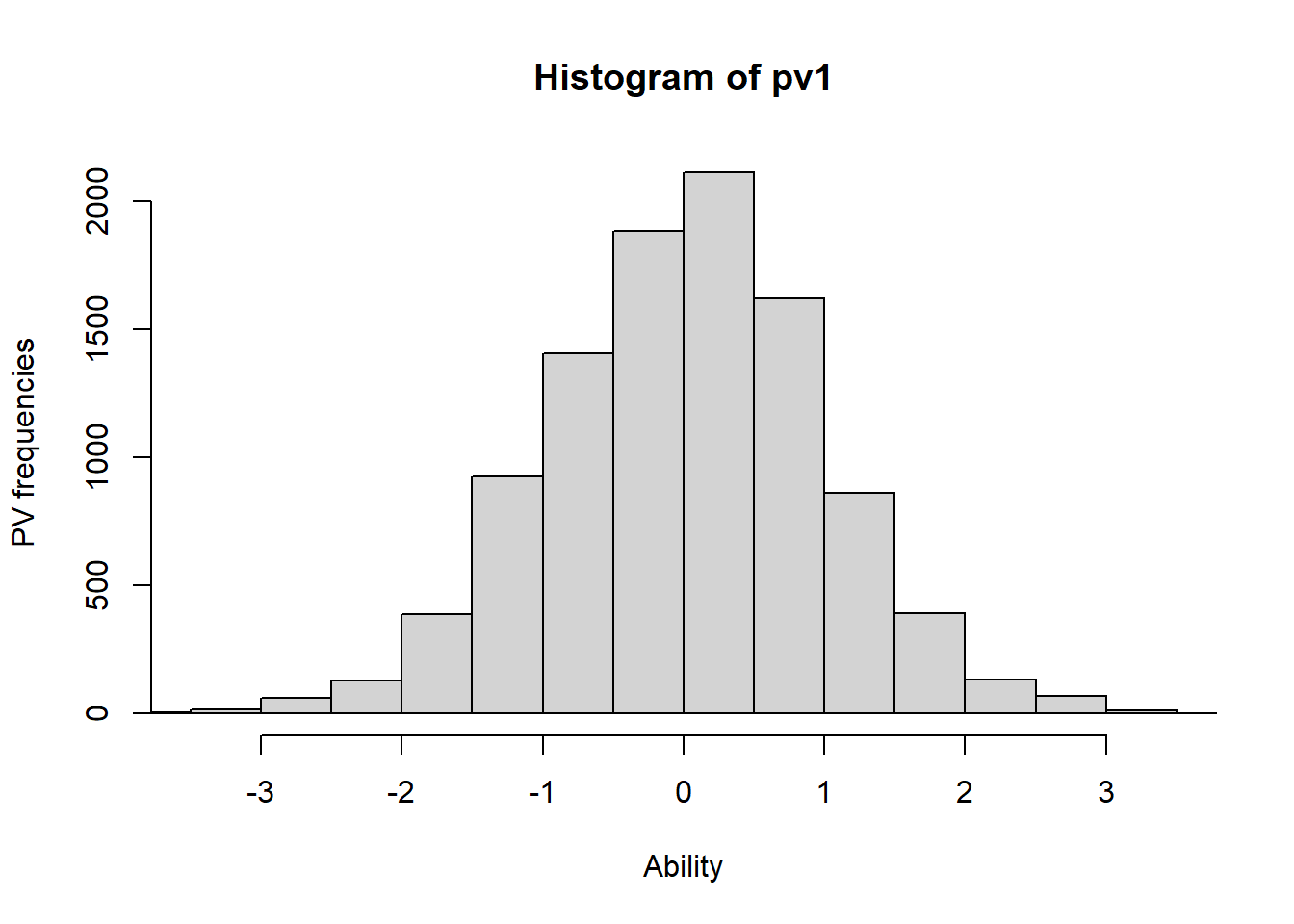 The simplest way to use plausible values is to choose one set (e.g, the first PV for every student) and compute the statistics you want, for example, the mean score. In our example above, we just chose the first PV, and computed mean and variance. We found that these matched the generating (true) values well. Of course, you can choose the second set of PVs, or the third set, etc. Each time you will get slightly different estimates. To combine results from multiple sets of PVs, simply take the average of the estimates. Note that this is different from first taking the average for each student, and then compute the statistic. Let’s do an example. The following R code assumes that PVs have already been drawn.

The above procedure is simple. However, when it comes to computing the standard errors of the statistics, the procedure becomes a little more complex, because we need to combine both sampling error and measurement error.

The procedure of using PVs to estimate a population statistic is as follows:

The procedure of using PVs to estimate the standard error of a statistic is as follows:

We will use the estimation of population mean as an example.

The following R code assumes that an item response data set called resp has been generated.

The process of MML estimation and the production and use of plausible values are illustrated below:

We should be able to stop here. However, to enable secondary data analysis, we need to provide data that can be processed using standard statistical software.

When secondary data analysts analyse the data, the process is reversed.

Simulate an item response data set with 5000 students and 20 items. Scale the data with both the JML and MML estimation methods. Answer the following questions: